Tephrochronology is a vital tool for correlating palaeoceanographic, palaeoclimatic and archaeological records around the Mediterranean. Extensive studies of tephra layers from marine sediments in the central Mediterranean (Ionian, Adriatic and Tyrrhenian Seas) have enhanced our understanding of archaeological, palaeoclimatological and volcanological records in that region. However, the Aegean and eastern Mediterranean Seas have not so far benefited from the stratigraphic and chronological control that tephra studies have afforded to the central Mediterranean. This deficiency is due to the lack of cryptotephra investigations of long marine sediment cores in the region and a very limited geochemical database of tephra from different volcanic centres, especially in terms of trace elements and isotopic compositions.

Thus, marine core MD81-LC31 from the south of the Antalya Basin is under examination for the last 20,000 ~120,000 years where there is significant climate variability and major changes in the record of human dispersal and 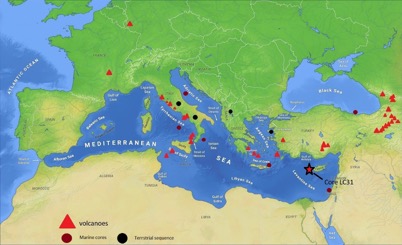 adaptation. Archaeological investigations into the Early Modern Human dispersal from Africa into Arabia over the last 200,000 years have revealed several tephra layers at terrestrial sites in South Eastern Europe, the Balkans, the Levant and North Africa. Initial investigations indicate that these tephra layers originate from the same Central Mediterranean, Aegean or Turkish sources that are likely to be represented by tephra layers in core LC31, thus, allowing correlations to be established between archaeological sites and palaeoenvironmental records and further resolve timings between climatic shifts and archaeological chronological uncertainties.

In addition, the location of core LC31 is only 250 km to the East of the poorly understood yet active Kos/Yali/Nisyros volcanic system and just 300 km from the extensively studied (for magmatic processes) but poorly dated Santorini volcano. Several poorly understood Turkish volcanic systems may also contribute tephra from the North by northerly Etesian winds. The visible and crypto-tephra work undertaken on core LC31 (the first marine core in the region be targeted specifically for tephra work), will provide the first integrated stratigraphy and chronology of eruptions from these sources. This will allow hypotheses relating to the rate of magma production through time, the relationship between eruptions, tectonics and sea level change and the impacts of eruptions on the ecology of the oceans to be tested. Left: Location of the Mediterranean Sea and core LC31. 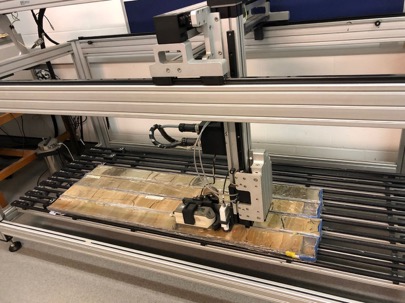 ITRAX XRF, X-radiograph, MSCL-XYZ facilities at BOSCORF provide a good basis to explore the sedimentological and environmental change through the core LC31. In addition the study will extend LC31’s existing Holocene proxy record by reconstructing oxygen isotope and Sea Surface Temperature from foraminiferas throughout the entire core. When coupled with this extended proxy record, the tephrostratigraphy of core LC31 will gain first order bio-chronological control as well as a palaeoenvironmental context, enabling several, previously inaccessible, volcanological and archaeological hypotheses to be tested. 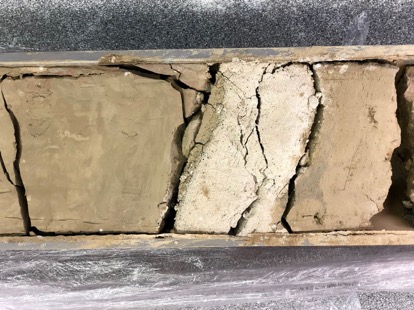